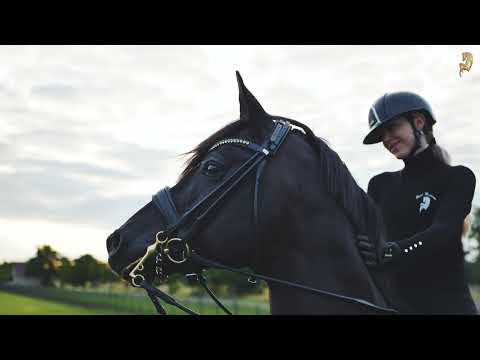 “Loved by the public – ennobled with the band – celebrated as Champion” – in short, Morricone inspires as multi champion – and this up to date! Whether sport or breeding, there are no limits for Morricone!

Like no other, Morricone unites an optimum in view of noble and top modern type, striking quality of movements as well as extremely brilliant rideability and strength of character. His resounding power of heredity made him a precious trademark stallion already at young age.

VTV-Oldenburg Sire of the Year 2021, Main Premium Winner 2016, the 2015’ Dressage Champion of the stallion performance test and 2014’ Oldenburg Champion Stallion – Morricone took all possible honorary titles in breeding. As Grand Prix winner Morricone fulfils all requirements in view of dressage sport. Beside qualifying for the final of the Louisdor Trophy, he collected several victories and placed with the best at horse shows with many strong competitors, such as the German Championships in Balve or at Horses & Dreams in Hagen a.TW. Already in 2019, Morricone inspired in the final of the Nürnberg Burg Trophy.

In his stallion performance test he won superiorly the dressage part with a score of 9.33 and received the maximum score 10.0 for rideability and walk four times. All basic gaits as well as constitution, character, temperament and willingness to perform were praised with scores of 9.5 and 9.0.

Morricone’s offspring exceeded all expectations. They stand out with their beautiful and noble type like they were all of a piece. Especially under saddle, Morricones offspring performs absolutely amazing. His daughter Macadamja was the striking 2022’ Bundeschampion of four-year old mares and geldings in Warendorf. Among the five-year old dressage horses the licensed stallion Macchiato became Vice Bundeschampion under Greta Heemsoth. Two other Morricone-sons placed with the best in the final. In total, Morricone sent 12 offspring to this year’s Bundeschampionat. Furthermore, Morricone presented twice the price highlights, Mister Universe (340,000 €) and Movie Star (250,000 €), at the Oldenburg auction. In addition, there are numerous champion foals at well-know foal championships as well as a high number of elite auction horses that were sold for high prices. 17 sons of Morricone are licensed including four premium stallions in Oldenburg, Hanover and Westphalia.

His classic line of ancestors appears like a fairytale: His sire Millennium was second reserve Champion at the 2010′ Trakehner main licensing and leads over his sire Easy Game to the noble blood of the Trakehner Gribaldi directly.

The grandsire is none other than De Niro.  It would go beyond the scope to honor his breeding record in detail.

In fourth generation the Grand Prix winner Rubinstein manifests the pedigree as founder of the modern R-line. This line is also known for the performance-sires Admiral I as well as Thoroughbred Guter Gast xx.