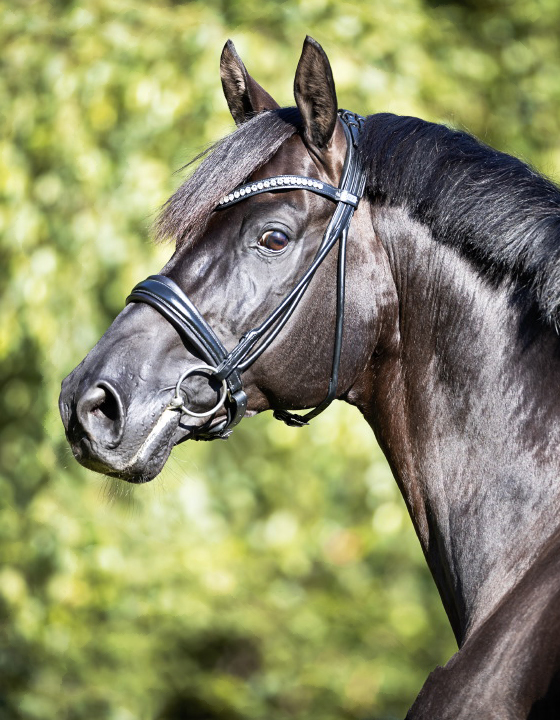 A model of a winner 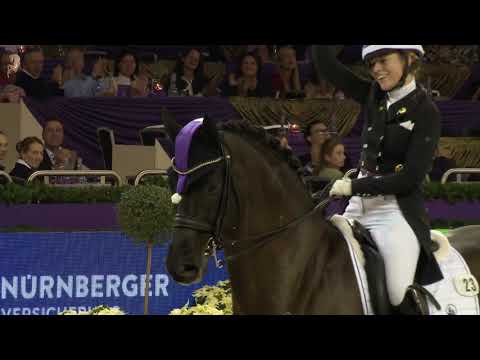 Cadeau Noir impresses with a striking charisma as well as powerful action of movements. His masculine habitus underlines his shining presence as sire.

In 2021 Cadeau Noir impressed in the top royal class all along the line. With several victories in Grand Prix classes as well as fantastic ten top placings this breath-taking black stallion left no doubt about being made for the grand arena. Cadeau Noir set another milestone with his international debut at the CDI3* in Herzlake, where he promptly took a ribbon in the Grand Prix Special class. Previously, he won the bronze medal in the final of the prestigious Nürnberg Burg Trophy. Then, in the following freestyle final, Cadeau Noir placed sovereignly on first rank with a score of 9.5 in the sold-out Frankfurt Festhalle.

Cadeau Noir completed his 30-day test with an exemplary result: with scores up to 9.0 for the basic gaits he also convinced all down the line in view of rideability and character. As second placed in the total dressage result with a final score of  8.43 and a breeding value of 137 points he went past the group of competitors including two champion stallions effortlessly.

The crops of this stallion created several sensations: Numerous Premium and Champion Foals were awarded throughout Germany. Twice he sired the price highlights at the Elite Foal Auction in Verden. Regularly, Cadeau Noir’s offspring attracted a lot of attention at Elite Foal Auctions. Cadeau Noir distinguishes his foals with a strikingly beautiful type as well as first-class action of movement with exemplary forward thrust.

In total, Cadeau Noir sired four licensed sons including the premium stallion Confess Color, who was sold for a knock-down price of 1.89 million Euro at the Verden stallion sale, and the ZfdP champion stallions Colany C and Classico Deluxe C. Cadeau Noir’s first offspring inspire already under the saddle with victories in tests for young dressage horses. In 2020 Cadeau Noir presented his daughter Candy Noir as Bundeschampion of six-year-old coach horses. Cadeau Noir’s foals are typically distinguished by a beautiful type as well as first-class movements with energetic hindquarters.

His sire Christ positioned himself among esteemed sires with 17 licensed sons. Christ was second reserve Champion Stallion in the group of stallions with emphasis on the dressage at the Hanoverian licensing in Verden in 2007 and finished his 30-day test with top scores. In the meantime, Christ competes highly successful in dressage up to Prix St. Georg.

The breeding of his dam, State Premium Mare Delicia, is very interesting too. Here, the sire-legends De Niro – Donnerhall on the paternal side meet Calypso II – Cor de la Bryère on the maternal side. The dam and her both daughters, who are both sired by Christ, were awarded premiums as mare family on the occasion of the Herwart-von-der-Decken Show in 2013. Cadeau Noir’s half brothers Nymphenburgs Finest Ampere by Ampere as well as Influencer by Asgard’s Ibiza are also licensed. Cadeau Noir’s mare line originates from a venerable and very successful Thoroughbred line, which can evenbe traced back to the 17th century.